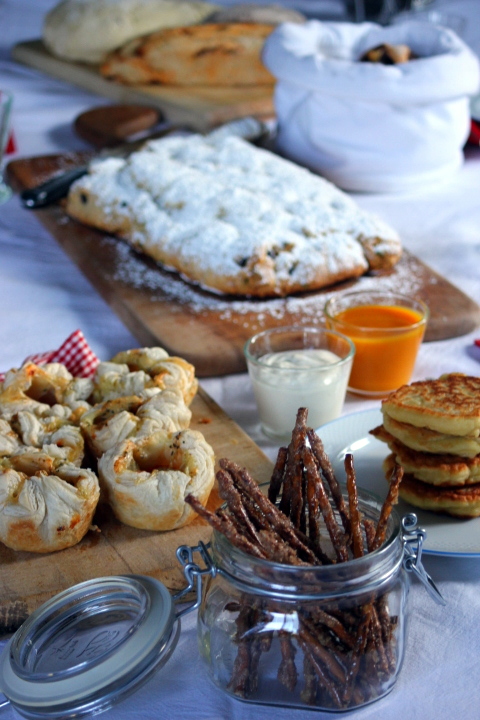 Christmas is over, the New Year is just beginning and I am still full from all the food I ate. But it was all worth it, it was just so good. And once a year it is perfectly okay to eat until you can´t move no more. We can start counting calories again when summer starts. If it was up to me, I would still try to avoid any cookies, cake or other sweets but since I am taking part in a baking challenge, I had no other choice but to get back in the kitchen and start getting creative.

The challenge consists of me going to the Metro Warehouse and picking up the ingredients they provided for me. I have to use everything they gave me, leaving something out is strictly forbidden. I can however add anything I like and I don´t have to use all the ingredients in only one recipe. The Ingredients were whole grain flour, cane sugar, olive oil, butter, soft cheese, cranberries, marzipan, mango puree, cream cheese, pretzel sticks, chocolate-espresso-spread and mustard. 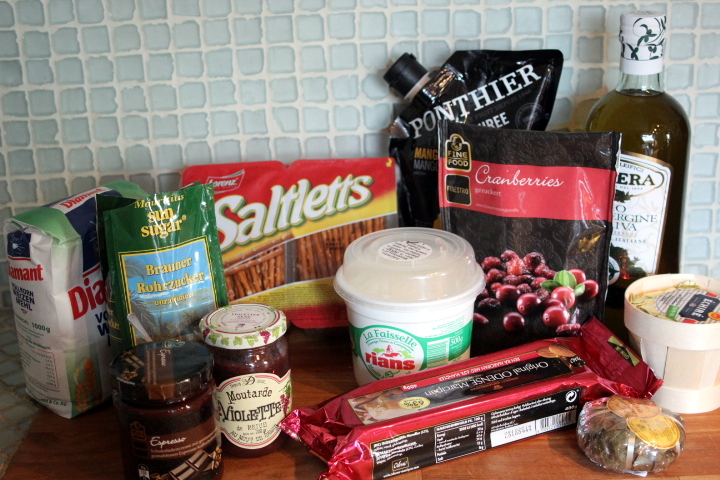 When I first took a look at the ingredients I was slightly irritated. What was I supposed to do with mustard and pretzel sticks. But since it´s called a challenge I brainstormed a little over the holidays and came up with some ideas for what to bake. I didn´t want to just make a bunch of different recipes that don’t really make sense together so I decided to make a holiday brunch.

The first thing I made is german Stollen. A traditional recipe that is made in Germany for Christmas. It´s like a sweet bread. I have never made one myself, but I thought marzipan and cranberries should work pretty well. They do! 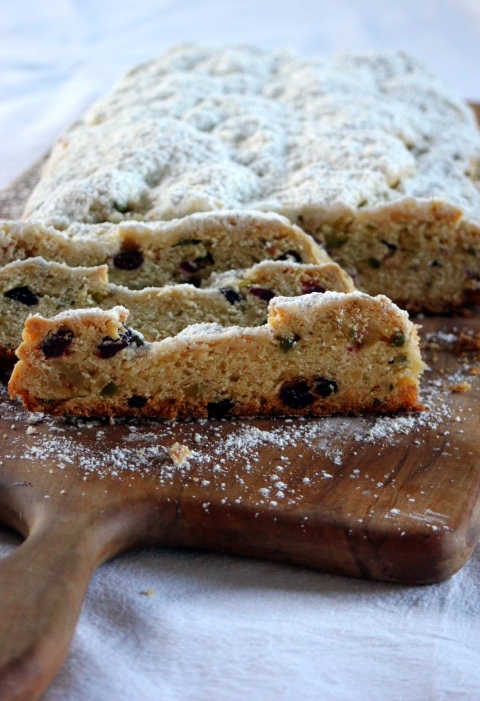 1) Put flour, sugar, the core of the vanilla bean and 200 g butter in a bowl. Heat milk until it is warm (it shouldn´t be too hot!) and mix with the yeast until the yeast has fully dissolved. Add milk and yeast to the flour mix and using a mixer knead well. Cover the dough with a kitchen towel and let the dough rise for about 50 minutes.

2) In the meantime, grate marzipan and chop the pistachios. Mix both with cranberries and almonds. Once the dough has risen, add the marzipan-cranberry-mix to the dough and knead well until the mix is spread within the whole dough. Put the dough on a baking sheet covered with parchment paper and make a Stollen. Fold over a little bit of the dough on the right and left side. Now roll the one side of the dough up to the middle, do the same with the other side so that they overlap. Finally, press in the middle. (It is well described in this video, although it is in German, just forward to the part where the Stollen is formed) Cover the Stollen and let the dough rise for another 30 minutes. Afterwards, bake in the preheated oven at 150°C for about 70 minutes.

3) Melt 150 g butter. Take the Stollen out of the oven and put on a cooling rack. Immediately spread some of the melted butter on top of the Stollen and cover with confenctioners´sugar. Repeat until you have used up all the butter and confectioners´s sugar. The Stollen should be covered with a white layer of butter-confectioners´sugar mixture.

Next up is homemade bread. Essential for every brunch. I made three different types, ciabatta, whole-wheat-mustard and white bread with dried tomatoes. 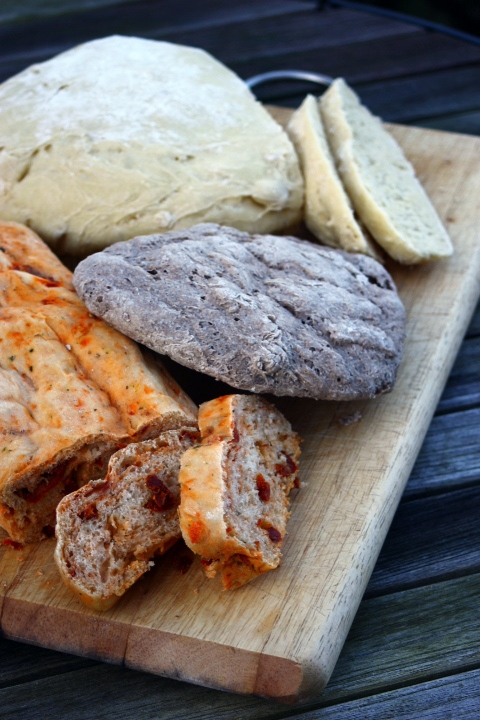 1) In a bowl, mix flour, whole wheat flour and sugar. Dissolve yeast in the warm water and add to the bowl, together with mustard. Knead well and let the dough rise at a warm place for about an hour.

2) Knead the dough again (add flour it it´s too sticky) and form little loafs of bread. Let rise for another 30 minutes and bake afterwards at 170°C until they are done.

For the white bread with dried tomatoes:

1) Prepare the dough as described above and let rise. Form loafs of bread, let rise again and bake at 170°C until they are golden brown. 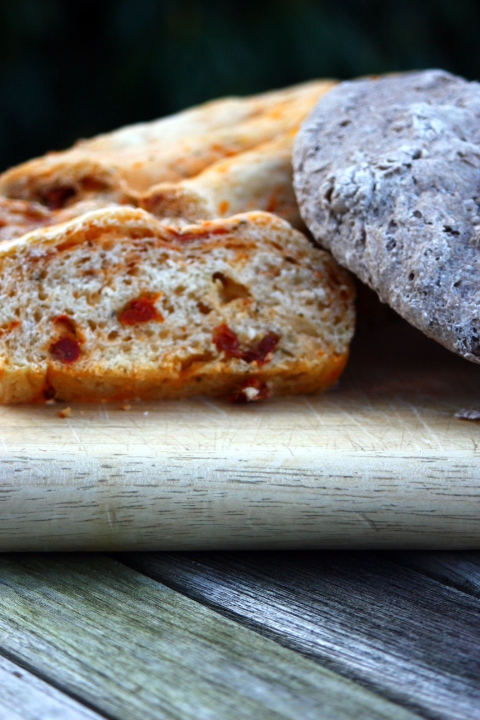 This bread takes a bit longer to make then the other ones. That´s because the first dough needs to rise for about 15 hours, until you can mix it with the other ingredients and start baking. The best thing is to start the day before.

3) On a floured surface, mold to loaves of bread. Let rise for another 45 minutes and bake in the preheated oven at 200°C for 15-20 minutes.

The next ingredient waiting to be turned into something delicious is chocolate-espresso-spread. First I thought of cupcakes, then of brioche an then I got the idea of these chocolate-croissants. I love croissants for breakfast. The original ones are extremely difficult to make but this yeast-version is just as good. 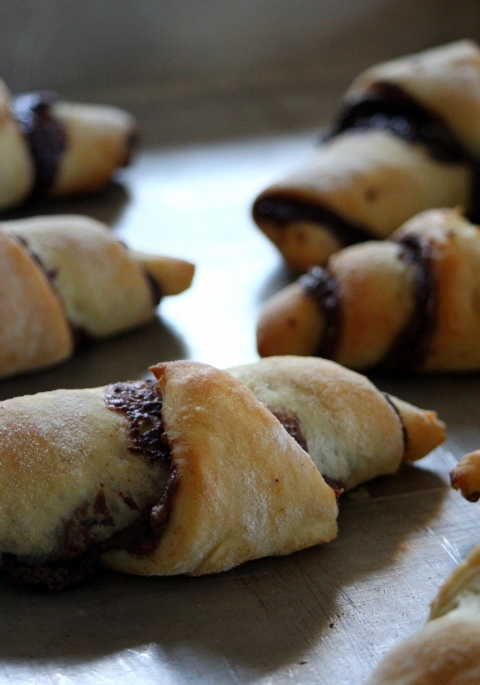 1) Melt the butter. Add milk and heat until warm. Mix yeast, 1 tbsp. of sugar and 3 tbsp. of the milk-butter-mixture. In a separate bowl, mix flour, salt and 30 g sugar and form a well. Pour the yeast-milk-mixture into the well, mix a little with flour from the frame and let rise for about 15 minutes.

2) Add the remaining milk and the egg and knead well. Let the dough rise at a warm place for ca. 20 minutes.

3) Roll out the dough on a floured surface. Spread the chocolate-spread on top (you might want to heat the chocolate spread, that way it becomes more liquid and is easier to spread). Cut the dough into 12 pie slices and roll each slice from the frame to the center, forming little croissants. 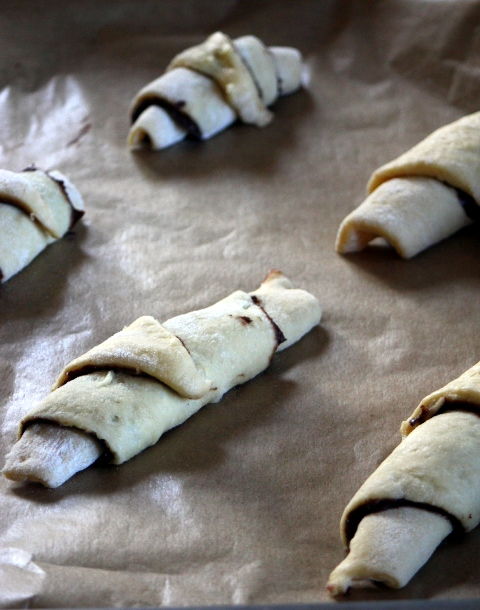 4) Bake the croissants on 2 separate baking trays in the preheated oven at 175°C for about 15 minutes. 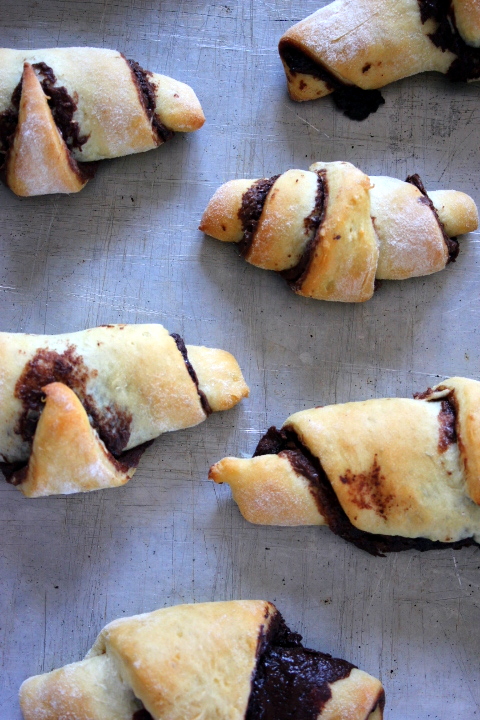 Now about the cheese. Part of the ingredients was a very intense smelling French soft cheese. My little brother would have escaped the kitchen immediately but I like cheese. Would fit perfectly to the homemade bread but that would have been too easy. So I decided to make little puff pastry muffins with cheese and tomatoes. 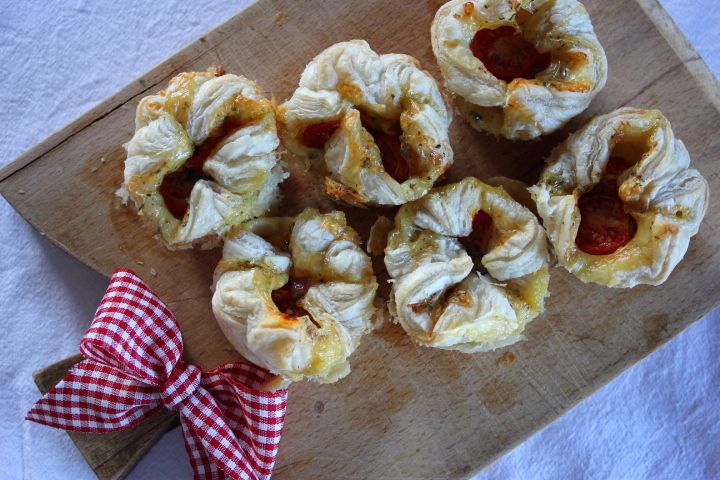 Soft cheese (or feta cheese and one egg)

1) Cut the tomatoes in halves and the soft cheese into little pieces. If you´d rather use feta cheese, mix cheese with the egg. 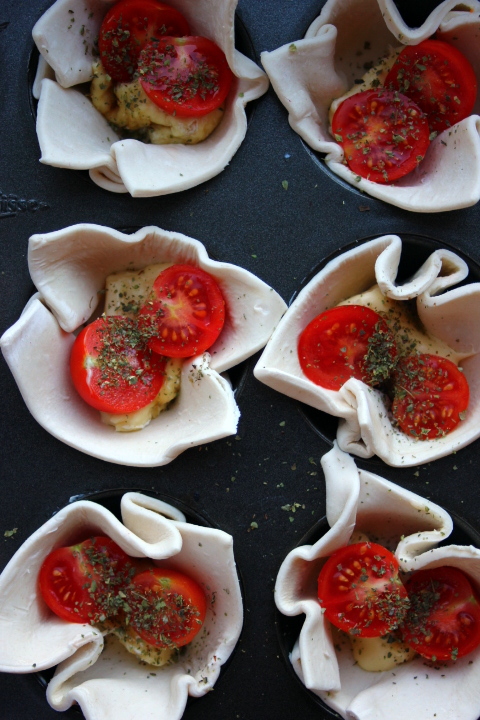 2) Butter a muffin pan. Fill each form with the puff pastry. The puff pastry should be sticking out a little. Fill with soft cheese or feta cheese and put tomatoes on top. Sprinkle some herbs on top and fold over the remaining puff pastry. Bake in the preheated oven at 200°C until the puff pastry is golden brown. This recipe doesn’t need salt or pepper because the cheese is very aromatic.

We are getting closer to the end (I know, quite a long post this time). But this pancakes should light up the mood, shouldn´t they? I love pancakes; whoever decided to serve pancakes for breakfast was a genius. And if you add mascarpone and mango puree the whole thing just becomes more delicious! 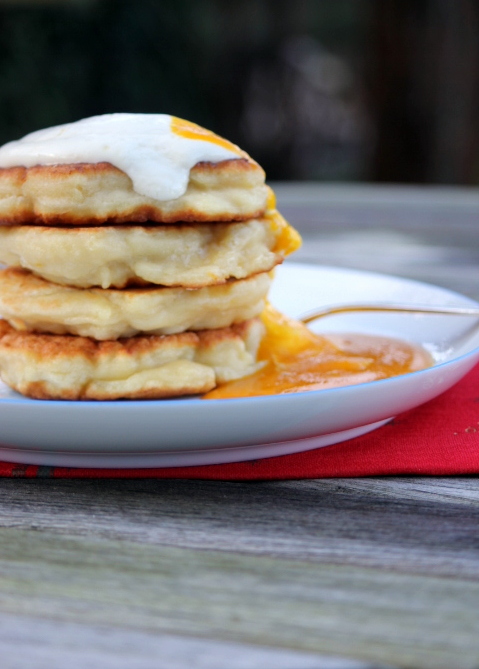 For the pancakes (makes about 15):

1) Whip the egg whites until stiff.

2) Meanwhile, whisk together egg yolks, ricotta, sugar, and zest in a separate bowl. Add flour and stir to combine. Whisk about a fourth of the egg whites into the egg yolk and ricotta mixture.

3) Gently fold in the remainder of the egg whites into the batter.

4) Cook the pancakes on medium heat. 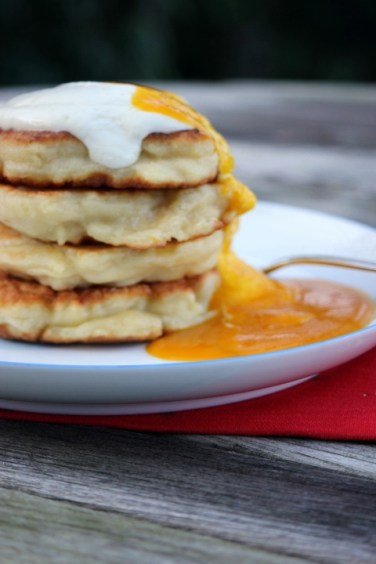 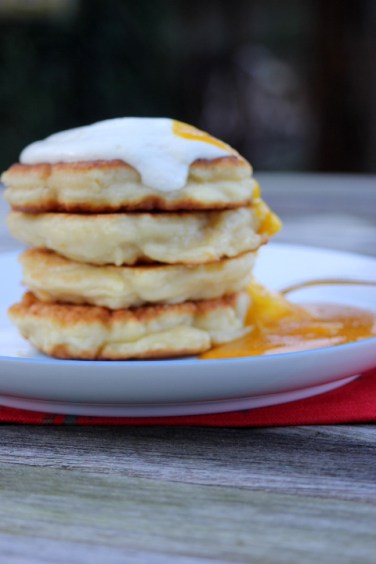 For the topping, mix cream cheese and mascarpone; add sugar and some lemon zest. I can´t provide exact measurements, I just mixed everything until tasted sweet and tasty. Serve with some mango slices or mango puree on top.

Lastly, the thing that proved to be the most difficult ingredient: pretzel sticks. I don´t even like them that much, what was I supposed to make out of them? I wasn´t even sure if I can bake them without them burning or falling apart. But then I found a recipe that seemed perfect: sugared pretzel sticks with vanilla and cinnamon. 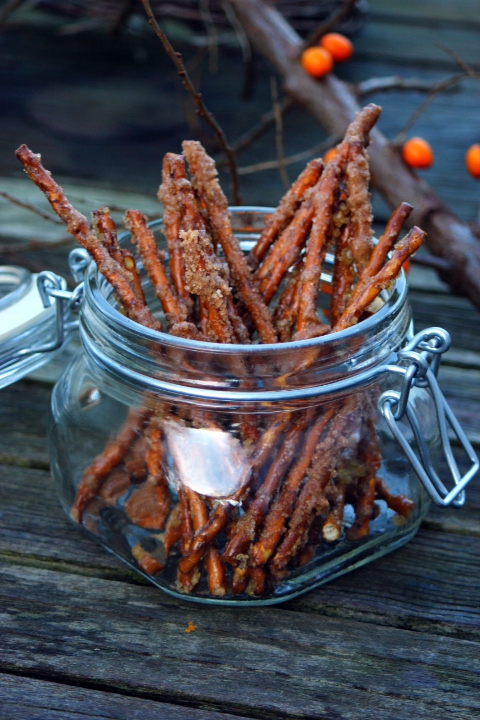 The recipe is very easy.

I made two different versions, one with cinnamon and one with vanilla. Whip each egg white until foamy (they should not be stiff). In one of the egg whites, dissolve the core of the vanilla bean before whipping. Mix the foam with the pretzel sticks and add in one half cinnamon and 200 g sugar, in the other half only the remaining sugar. Bake in the preheated oven at 160°C for about 20 minutes until they are nice and crunchy. 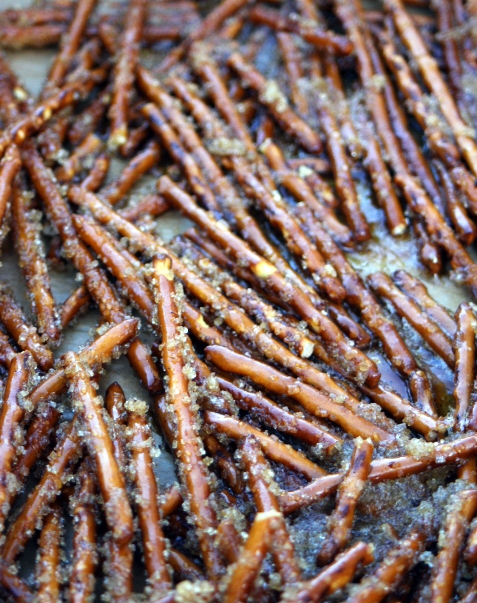 Now, I hope everybody had a good start into the New Year, hopefully with not too many resolutions. I´ll be in the kitchen (at least when I am not studying for finals) to provide more tasty recipes. Happy New Year everybody!