Do you know Churros? Of course you do, they are the best. They are fried, sugared deliciousness dipped in chocolate sauce. Kind of like the best idea ever!

I know that churros are not exclusively Mexican. I´ve had them in Spain (which I think is where they originally come from but correct me when I´m wrong) and I know that many countries in Latin America have them. But you can get them pretty much everywhere in Mexico so this recipe will mark the end of our little virtual trip.

I really don´t know anyone who doesn´t like churros. How could you not? They are fried (!) and dipped in sugar (!!) and hot chocolate (!!!)! Well you get the point! I´ve bought them in the streets of Mexico or in a little Spanish Café and they could instantly put me in a better mood. It is actually quite easy to make homemade churros. All you need is some flour, oil, water and chocolate and you are good to go. So let´s do this! 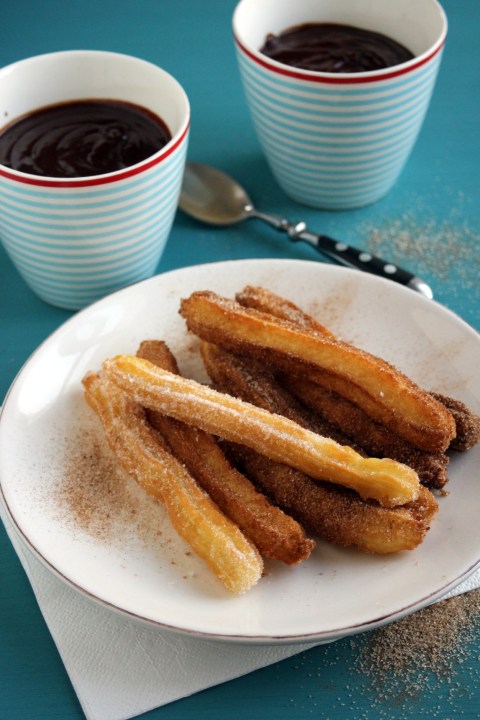 1) Mix Cinnamon and sugar and set aside. In a bowl, mix flour, salt and baking powder. Mix olive oil with 450 ml of boiling water and add to the flour. Mix well until you have a firm dough. Let rest for 10 minutes.

2) Heat frying oil to 170°C. Use your hands or a piping bag to form churros and fry them for about 3-4 minutes until golden brown. Drain on paper towels and roll in the cinnamon-sugar mixture.

For the chocolate sauce:

1) Mix chocolate, sugar and cream and let simmer on medium heat until the chocolate melts. The chocolate sauce should be thicker than regular hot chocolate, almost like pudding. Serve with the churros.