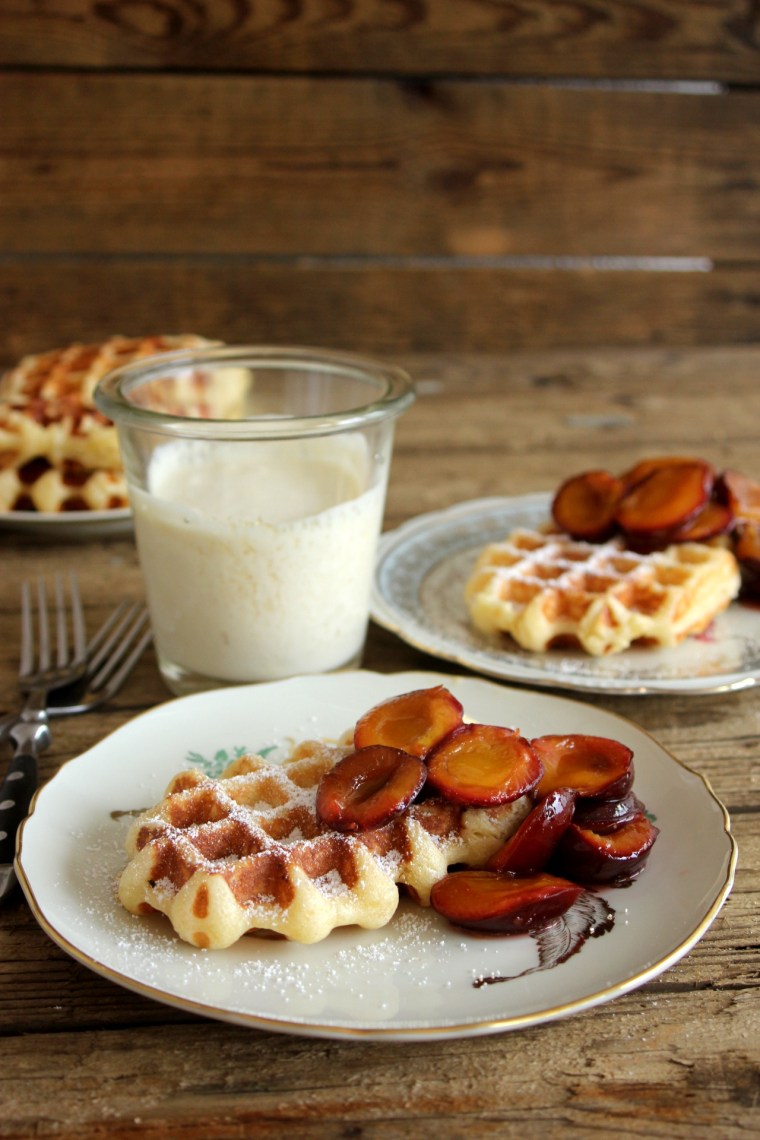 Waffles!! WAFFLEEES! Are you as excited as I am? If not, wait until you have tried this recipe! 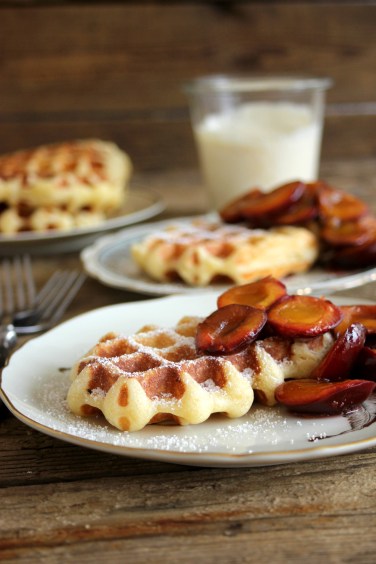 Waffles with plums and sweet cream 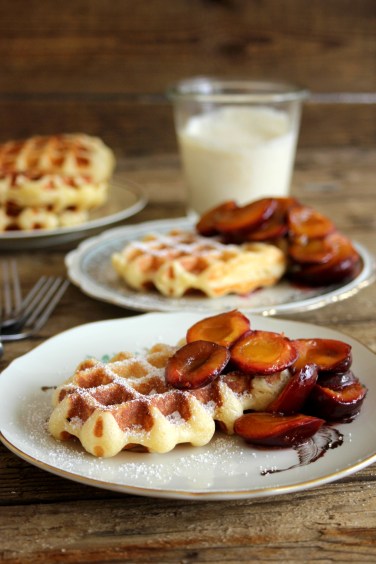 Waffles are the ultimate comfort food for me. This recipe has the advantage that it triggers a lot of childhood memories. The recipe is (once again) from grandma although she used to serve them with cherries and walnut ice cream. Every time I eat those waffles, it´s like I am being little again, sitting at my grandma´s table, desperately wishing to be allowed to jump in the pool after the meal. (Yes, my grandparents had a pool and yes, it was the coolest thing ever) 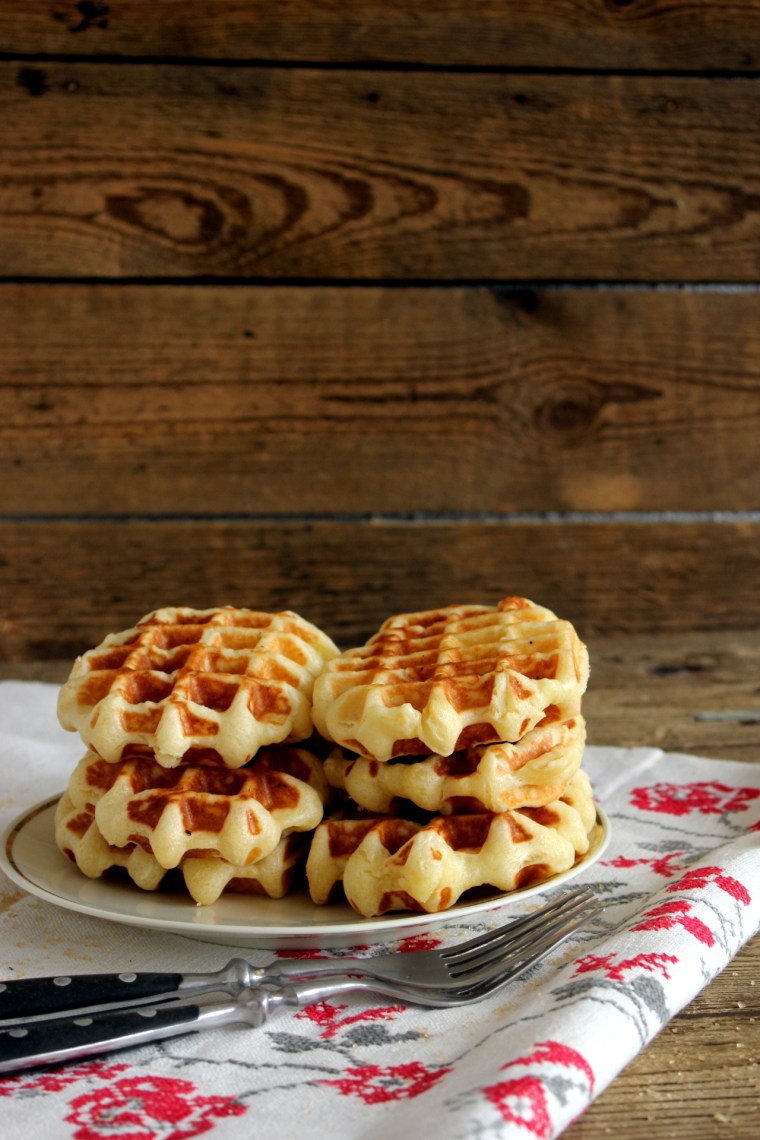 It took a while until I finally got a hold of this recipe and ever since, I discovered the secret of crispy waffles. Apparently it´s really important to use yeast dough which shouldn´t be too thin. If you think that the dough is more appropriate for brioche or bread-making, that´s when it´s got the right consistency for the perfect crispy waffle.

Waffles can be served with pretty much everything. Here in Germany, they are traditionally served with hot cherries and vanilla ice cream but some chocolate or confectioners ‘sugar are great as well. I still had some of those handpicked plums in the freezer so I decided to cook them with some red wine and cinnamon. I also added some sweet sour cream because I like to use that instead of whipped cream. The waffles are great for freezing by the way. Just put them in the toaster spread some Nutella on top and you got the perfect breakfast or afternoon snack. 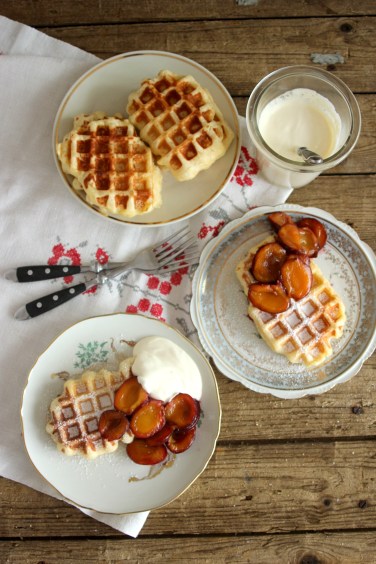 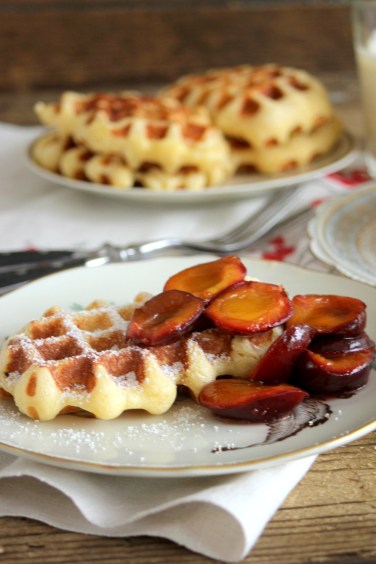 For the plums:
500 g plums
50 g sugar
4 tbsp. red wine (you can also use orange or prune juice if the waffles are for kids)
1 cinnamon stick

1) Wash the plums, take out the core and cut in halves. Cook in a pot together with sugar, red wine and cinnamon stick. Once it is boiling, turn down the heat and let simmer for about 3-5 minutes.

1) In a bowl, mix flour, yeast, sugar, milk, egg and butter. Let the dough rise at a warm place. This takes at least an hour so make sure to prepare the dough early enough.
2) Once the dough has risen, add corn starch and possibly a little milk if the dough is too solid. Don´t let the dough get too runny though, otherwise the waffles don´t turn out very crispy.
3) Heat and butter the waffle iron. Bake the waffles until they are crisp and brown.

1) Mix sour cream with sugar and if you like the core of the vanilla bean. Taste and add more sugar if it´s not sweet enough. 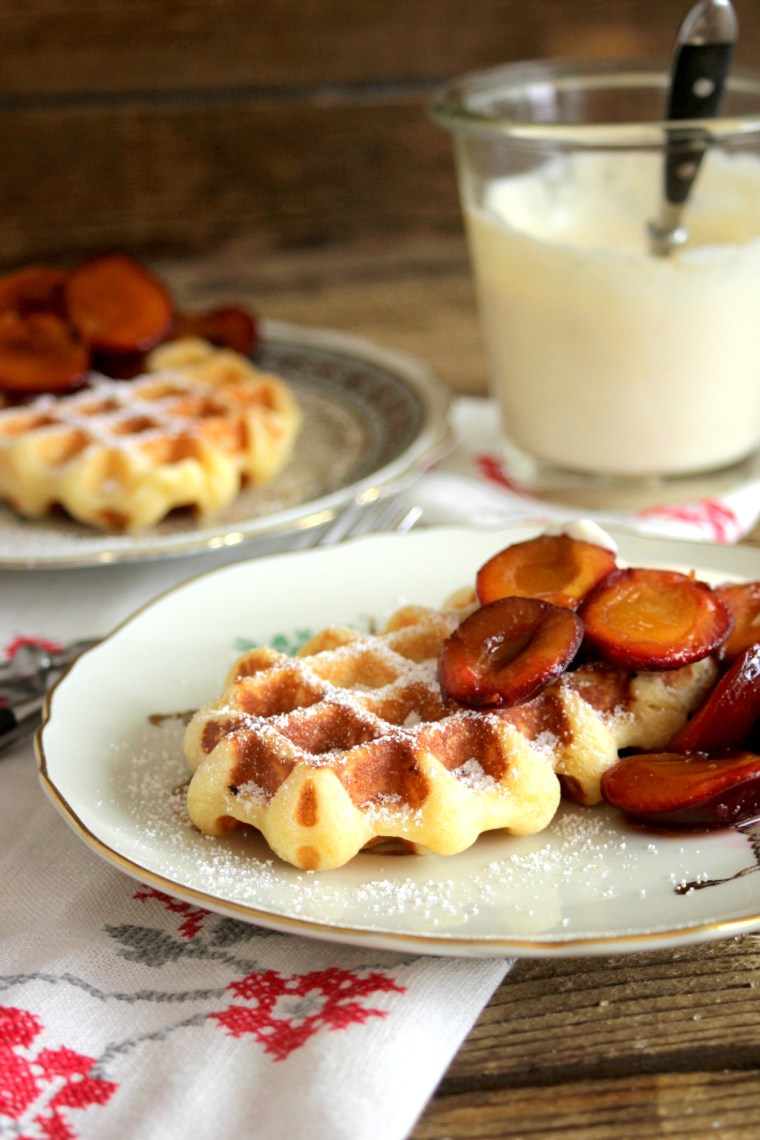