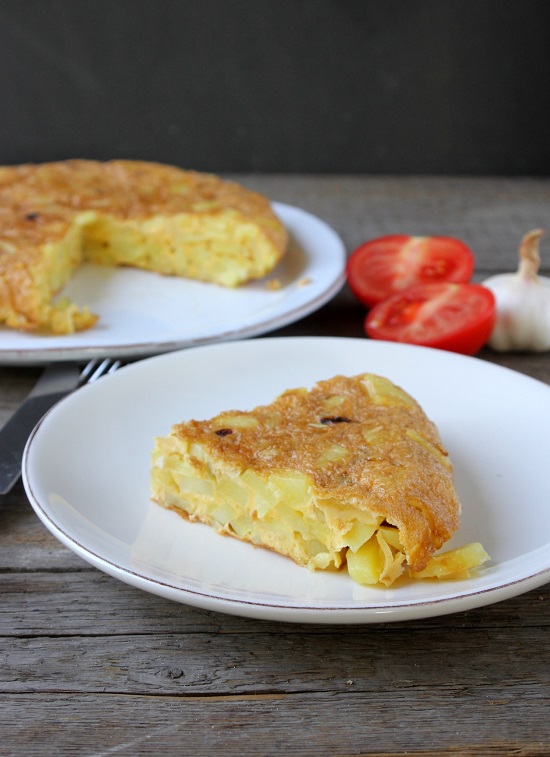 Everyone who´s been to Spain or has ever eaten Tapas should know Tortilla de patatas. The Spanish specialty, made from eggs and potatoes is one of the most typical dishes you can make. The Spanish eat it all the time, lunch, dinner, tapas…you can serve it to anything. I am not saying that I make the perfect Tortilla but I know who does and I was able to get some secrets. 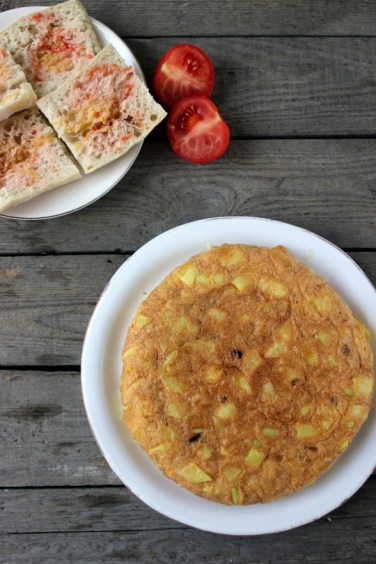 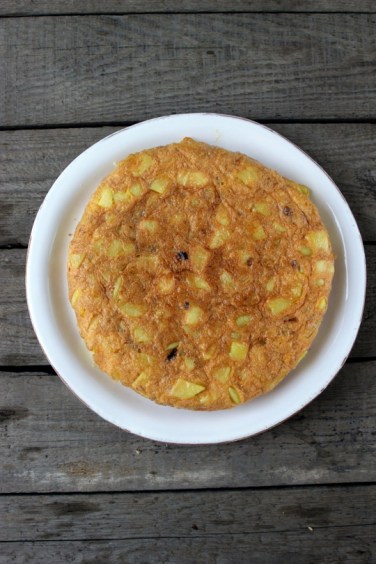 Growing up, we would go to Spain every year to go camping, skiing and visit friends. And every year, when we got to Barcelona after a 14 hour drive, completely exhausted, we would be greeted at our friends house with the first strawberries of the year (with whipped cream of course) and Tortilla. I don´t know why but Spanish Mothers just know how to make the best Tortilla. It´s in their culture or genes or something. I don´t know what it is and I don´t know why mine never turn out the same. Sorcery! 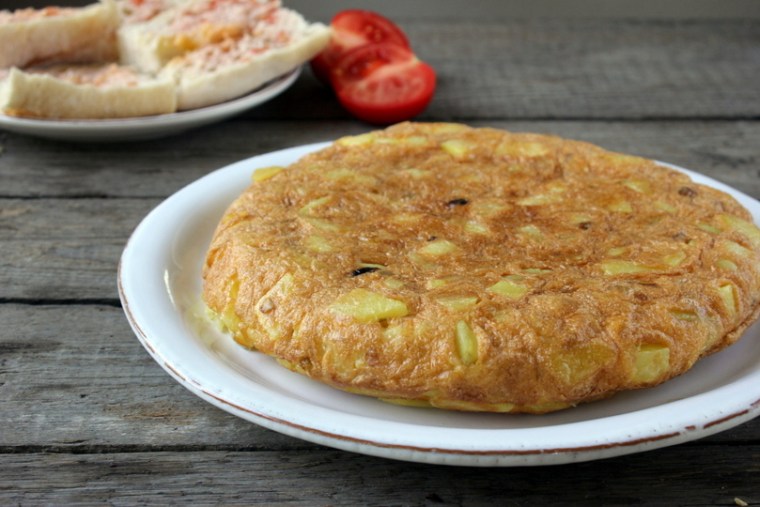 Anyway, when I finally got to spend a year in Barcelona, I made sure to discover all the secrets there are on preparing Tortilla. My goal was to create a real authentic Tortilla and after my 563 try I think I got it.

If you want to serve Tortilla the real Catalan way, make sure to prepare some pa amb tomàquet. It translates to bread with tomatoes and that´s exactly what it is. You cut open some fresh baguette (roast it if you like), spread some tomatoes on top (make sure to get the juice out of the tomato), sprinkle with salt and olive oil and enjoy. 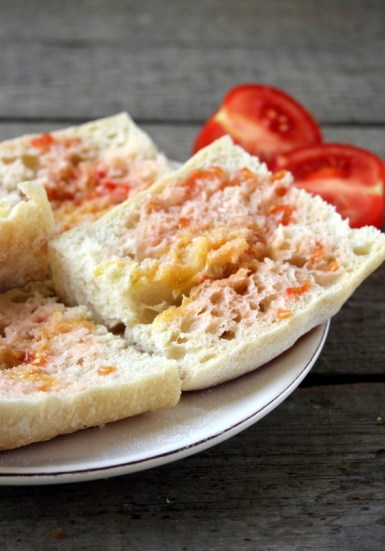 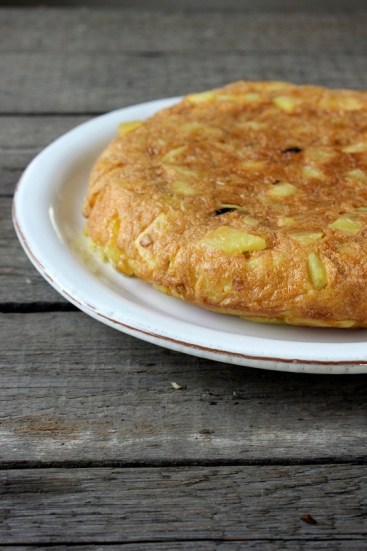 Now to the secrets of Tortilla-making:

Rule number 1: There are no rules. At least concerning the ingredients. Whether you like your Tortilla with onions or not is completely up to you. Also the question, if you want to add some milk or baking powder to the eggs. All of this is completely fine and up to your taste.

Rule number 2: Fry the potatoes. Yeah I know, it´s not the most fat-free way but it makes all the difference. Just remind yourself that the Spanish cuisine in general is regarded as pretty healthy. And they it all the Tortillas so they must be doing something right! I you (like me) don´t have a chip pan, just use a lot of olive oil. That is another secret of the Spanish cuisine – olive oil makes everything better! 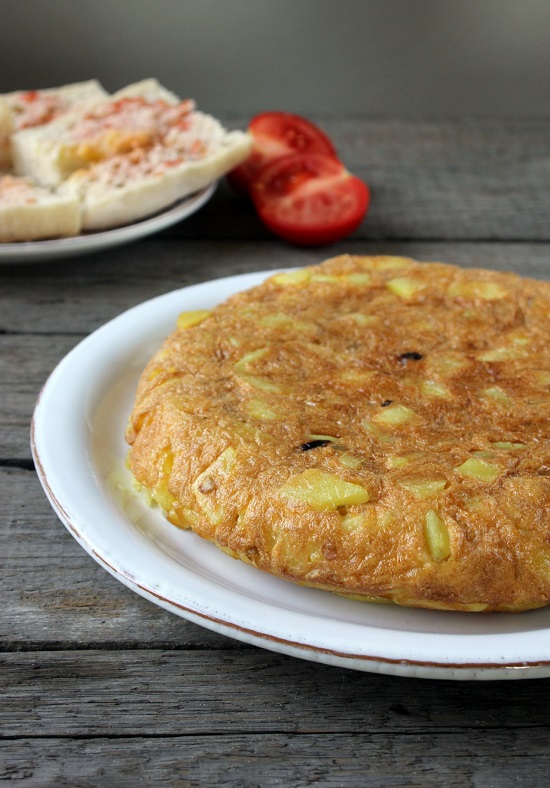 About 750 g Potatoes (the amount varies depending on the size of your pan. Just use enough potatoes so that the pan is filled up)

1) Peel the potatoes and chop into little pieces. Roast in a lot of olive oil until they are soft (or use a chip pan to fry the potatoes). Add onions after a while and let roast as well. In the meantime, whisk the eggs in a separate bowl. You can add some milk and baking powder if you like. Season with salt.

2) Once the potatoes are done, add them to the eggs and mix well. Place the egg-potato-mixture into the pan and let cook on little heat. Once the Tortilla starts to get firm, turn it over so the other side can cook as well. For doing so, place a large plate on top of the pan, turn the pan over and let the tortilla glide into the pan again. Let the tortilla cook for a couple more minutes until both sides are golden-brown. 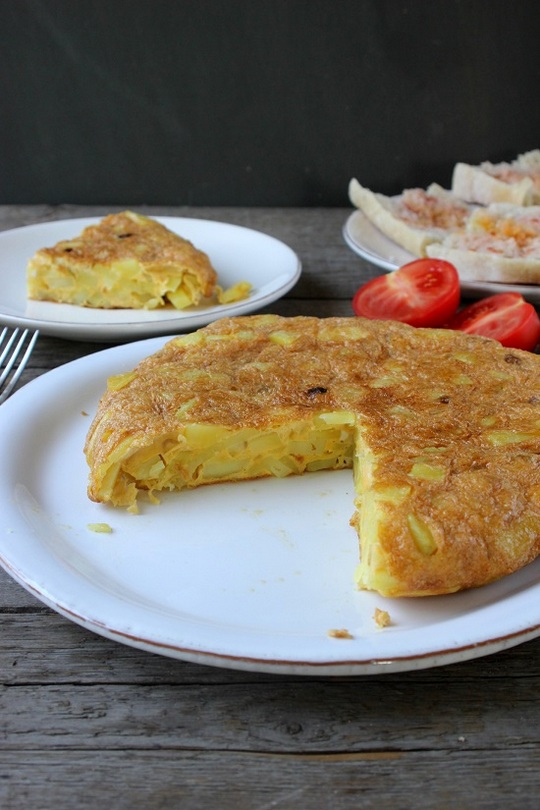